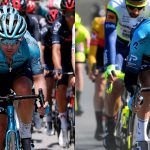 The epic Mont Ventoux was on today´s menu for the eleventh stage of the Tour de France with Alexey Lutsenko showing his form with an impressive eighth place.

With one ascent of the iconic climb already brutal enough, the peloton faced it twice before descending towards the finish line in Malaucéne after 198.9 kilometres.

It was, as expected, a fight for the daily breakaway as soon as the flag dropped and some kilometres after leaving the start town Sorgues, the favourites for the stage win went on the attack. Astana – Premier Tech had several cards to play but also kept an eye on the overall ranking with Lutsenko.

Jakob Fuglsang was the first rider of the Kazakh – Canadian team to try his luck in an early breakaway but the group got caught ahead of the second climb of the day. After a long battle and countless moves brought back, a group was finally able to open a gap on the peloton.

Lutsenko, Fuglsang and Ion Izagirre stayed in the yellow jersey group, which was some minutes behind the leading group.

Approaching the first ascent of Mont Ventoux, Fuglsang and Izagirre had to let the group go and rode home in their own rhythm, crossing the line around 15 minutes down on eventual stage winner Wout Van Aert.

On the final lap up Mont Ventoux, Lutsenko trailed the solo leader by two minutes but dug deep all the way to the line. The Kazakh rider put in a strong ride, pushing on the descent towards the finish line, which saw him cross the line in a strong eighth place. After this great ride, Lutsenko moved up to seventh place on the General Classification.

It was a brutal stage today. Due to the overall ranking, I tried to stay as long as possible on the wheels of Pogacar, not to lose any time in the GC, and it worked quite well. On the top of Mont Ventoux after the second time, I found myself with Kelderman and the chase was on. I am happy with my 8th place and also that I could move up again one place on the overall ranking. Of course, the Tour is still long with some tricky and tough stages but so far I am satisfied with my performance. – Alexey Lutsenko