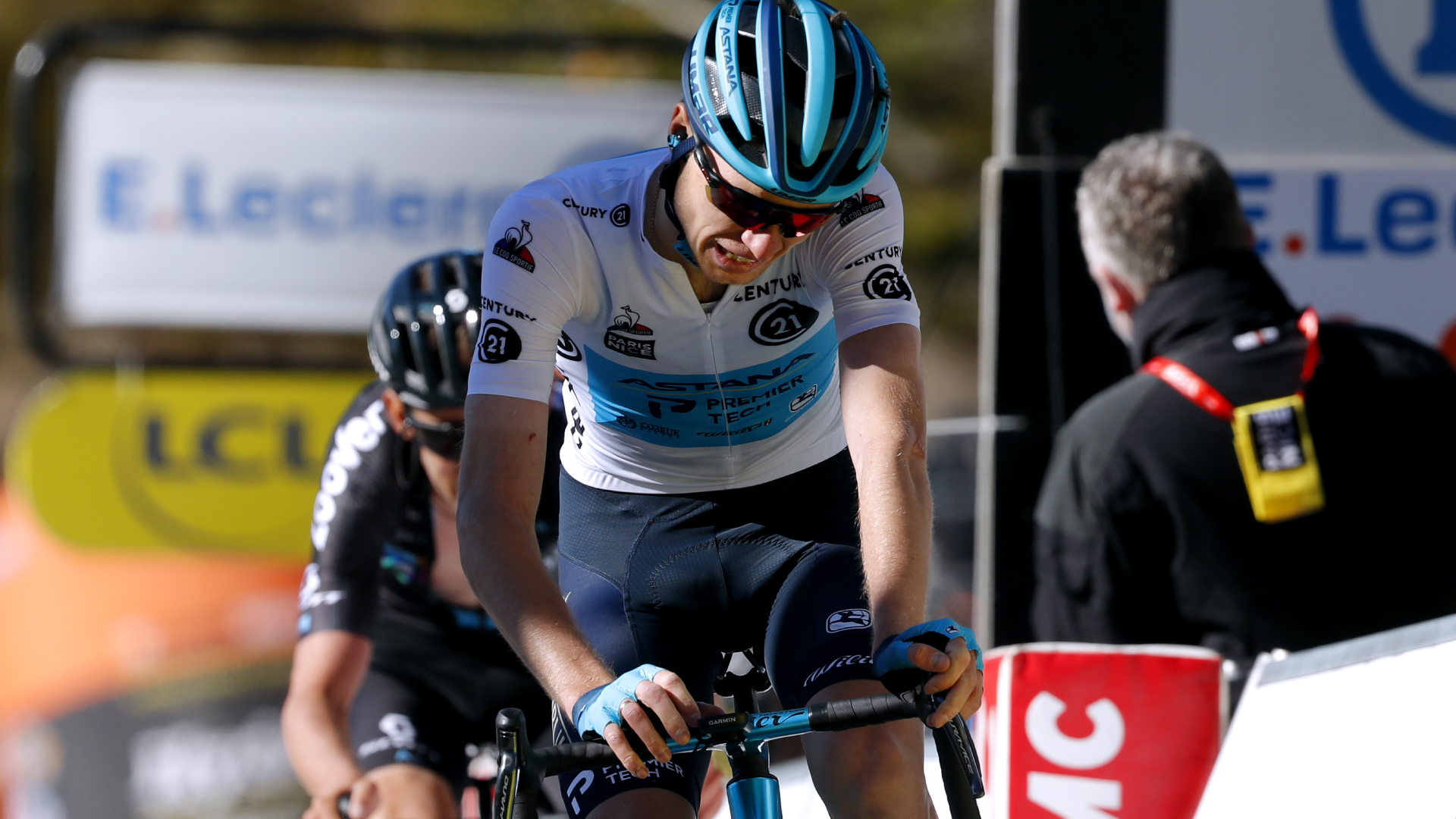 Aleksandr Vlasov successfully defended his white jersey on the queen stage of Paris-Nice and moved into third place on the General Classification, while Alexey Lutsenko spent another day in the breakaway on stage seven.

The short but brutal stage featured four categorized climbs including the category one summit finish on the Valdeblore La Colmiane. 13 riders, including Kazakh road race champion Lutsenko, broke clear on the first climb of the day. However, with a few threatening riders on GC amongst the group, the peloton kept them on a short leash.

After the gap reached a maximum of two and a half minutes with 50 kilometres remaining, the peloton picked up the pace on the run into the final climb. At the base of the 16-kilometre climb, which averaged a gradient of six percent, Lutsenko’s group was just one minute ahead.

Lutsenko rode aggressively and helped keep the breakaway’s chances alive until the group was down to just four riders. However, he lost contact when cramp set in on the steep slopes with the reduced peloton catching him with 10 kilometres to go.

“We had a plan to have someone in the break, so from the start I was up there and as soon as I saw attacks I did my best to follow them. Finally, I managed to go away in a good group. I felt quite well and on the final climb I tried to accelerate to make a selection in our group. It worked out pretty well and finally we went away with just four riders. But in a moment I got cramps and I had to slow down a bit to recover from it. Then I tried to restart and to come back to the front, but it was too late. I am not at my top form yet, but I am on the right way. Day by day and race by race I am improving, so I hope to be ready for my biggest goals of the season,” said Lutsenko.

Omar Fraile and Luis Leon Sanchez dug deep for their teammates Vlasov and Ion Izagirre, hitting the front of the reduced GC group with four kilometres to go in an impressive display of teamwork.

Under the flamme rouge, race leader Primoz Roglic attacked in what would be the winning move. Roglic caught the final breakaway rider just metres from the line and behind, Vlasov and Izagirre gritted their teeth and pushed on to limit their time loss on the finish line. Vlasov crossed the line in fifth place, ten seconds behind Roglic, while Izagirre finished in eighth place, a further five seconds back.

Ahead of the final stage, Vlasov retains the lead in the young rider classification and sits in third overall, followed by Izagirre in fourth, and Astana – Premier Tech continues to lead the team classification.

“In general, I am happy with the way I rode today and the fact I protected my white jersey. It was a hard and fast day in the mountains, so we had to do our best to stay in front and to fight for a good position. We started the last climb at a really high speed and later with around five to six kilometres to the top, the pace of the group increased even more. I can’t say this kind of fast climb suits me well, but I had great support from my team and I could stay in front, protected well by my teammates. In the end, I just gave my best. I was trying to follow Roglic, but it was too fast for me. However, I managed to stay close and to finish not so far from him. So, now I am in the white jersey and in third position in the GC. Tomorrow there is another tough day in the mountains so we still have to keep concentrating and keep on fighting to finish this race in a good way,” said Vlasov.